Innovation Sighting: Apple’s Use of Attribute Dependency in iPhones

Adding Value to Your Marketing Efforts

Innovation Sighting: Apple’s Use of Attribute Dependency in iPhones

"The Quiet TimeTM Universal System turns cell phones off automatically in designated areas such as theaters, hospitals, doctor's offices, and business meeting rooms. Our patented technology converts your incoming calls to text messages and alerts the cell phone owner." This may sound like the latest gizmo you would see at the Consumer Electronics Show. It is actually an invention created by my students using Systematic Inventive Thinking...in 2007, the year the iPhone was first released. Five years later, Apple has been awarded a patent described as an "apparatus and methods for enforcement of policies upon a wireless device." It reveals a way to change aspects of a mobile device based on certain events or surroundings.

This may sound like the latest gizmo you would see at the Consumer Electronics Show.  It is actually an invention created by my students using Systematic Inventive Thinking…in 2007, the year the iPhone was first released.  Five years later, Apple has been awarded a patent described as an “apparatus and methods for enforcement of policies upon a wireless device.”   It reveals a way
to change aspects of a mobile device based on certain events or surroundings.

As reported by CNET:

“Imagine a mobile phone that automatically turns off its display and sounds when it senses that it’s in a movie theater.  For example, the phone could disable its own noise and display if it knows it’s in a theatre. It could be prevented from communicating with other devices if it detects that it’s in a classroom. Or it could automatically go into sleep mode if entering a sensitive area where noises are taboo.  In a typical scenario, the mobile device would communicate with a network access point that enforces a certain policy, such as putting the handset on mute. Users could have the option of accepting or rejecting a connection with the access point based on the policies. A single access point could also offer multiple policies.”

This is a classic example of the Attribute Dependency Technique, one of five in the SIT innovation method.  You can spot Attribute Dependency concepts immediately when you see one aspect changing as another changes.  In this new patent, Apple calls it “situational-awareness” technology.

Attribute Dependency differs from the templates in that it uses attributes (variables) of the situation rather than components. Start with an attribute list, then construct a matrix of these, pairing each against the others. Each cell represents a potential dependency (or potential break in an existing dependency) that forms a Virtual Product. Using Function Follows Form, we work backwards and envision a potential benefit or problem that this hypothetical solution solves.

Attribute Dependency is a versatile tool, and it explains the majority of new products as reported in the research by Dr. Jacob Goldenberg.  I used it to create a lot of new concepts for the iPhone in my September 2008 blog posting.  In each of these concepts, look for the telltale sign of Attribute Dependency: as one thing changes, so does another.

1. CARRIER-CONTEXT:
Allow users to switch wireless carriers depending on whether phone
calls are business or personal.  Pre-select which phone numbers go
through which carrier in the iPhone’s Contacts.  This makes it easier
for people to keep track of phone expenses and allows enterprises to
control and monitor costs more accurately.  Same could be done for email
addresses.

2. FUNCTION-CONTEXT:
iPhone apps re-arrange automatically on the desktop depending on the
context of use (with friends, family, co-workers, or myself).  For
example, with co-workers, the apps become more business related
(conferencing, calculator, tools, timer, meeting planning, notes, etc).
Geo-sensing tells the phone who you are with, then changes
appropriately.

3. VOLUME-LOCATION:
The iPhone goes to silent mode automatically depending on where it is
(in conference rooms, churches, the boss’s office, etc), or switches to a
louder mode in places like the car, grocery store, or other noisy
environments.

4. JOB-FUNCTION:
The iPhone is customized with apps depending on job, profession, or job
type.  A health care worker, for example, might have an iPhone that is
optimized for a hospital setting (updated information about patient
location, records, medications, potential cost savings, infection risks,
etc).

5. LOCATION-LINKAGES:
Wi-fi and other linkages (carrier, email client, SMS) change depending
on location to optimize for the situation.  For example, wi-fi would
turn off for certain networks that are password protected so the phone
stays connected to the cellular network.  Saves time from having to
switch back and forth manually.

6. BATTERY LIFE-TIME:
The user can switch to a “battery conservation mode” that will power
down features not needed (color screen goes to black and white, wi-fi
off, vibration off).  Or, the iPhone does it automatically depending on
time of day such as at nighttime.  For travelers who like to keep the
phone on all night in their hotel room, this would save time and battery
life.

7. CAPACITY-RANGE:  Enable iPhone to “borrow” the optical disk space of a nearby Mac of PC much like the MacBook Air does.

8. PHOTO QUALITY-BROWSER TYPE:
This is an odd one, but that is the beauty of this tool – it makes you
put together combinations of attributes you would not think of.  In this
case, the iPhone would allow you to vary the photo quality to load into
different browser types or features.

9. MUSIC SOURCE-LOCATION:
The iPhone would recognize when it is in an airplane, restaurant,
store, concert, museum, or other venue, and it would pick up the music
or broadcast that is streaming just within that venue.  It might include
advertising or other useful information relevant to the venue (example:
restaurant menu specials, airport flight delays, museum closing time,
etc).

10. FUNCTION-LOCATION:
The iPhone “shopping buddy” would tell you what items on your shopping
list to get in a certain order to save the most time.  It would suggest
items on sale as substitutes for what’s on your list.  It would tell you
what checkout line is fastest, and it would know how much you are about
to spend.  Perhaps it could link right to PayPal and complete the
checkout process for you. 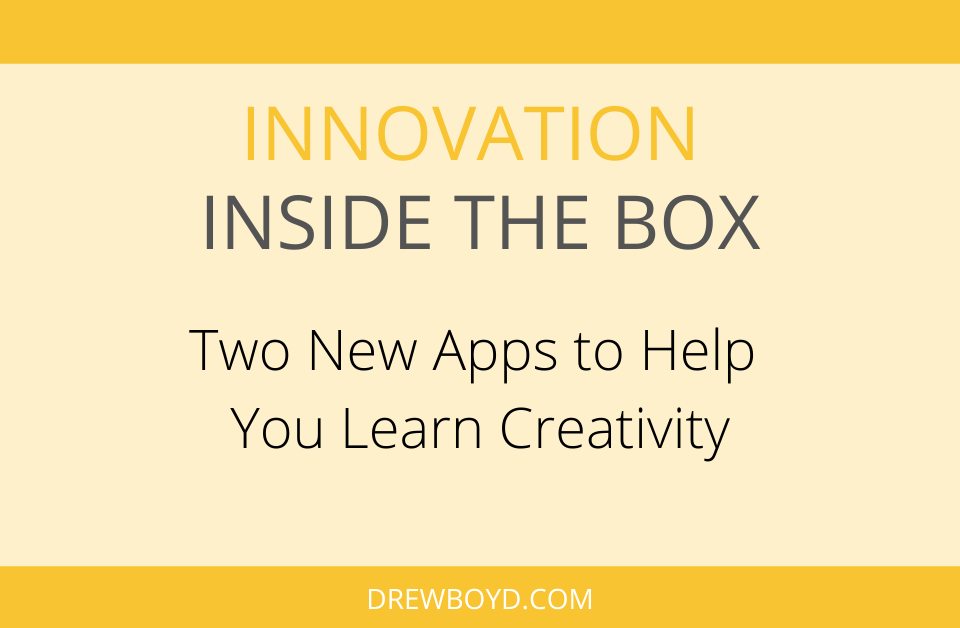 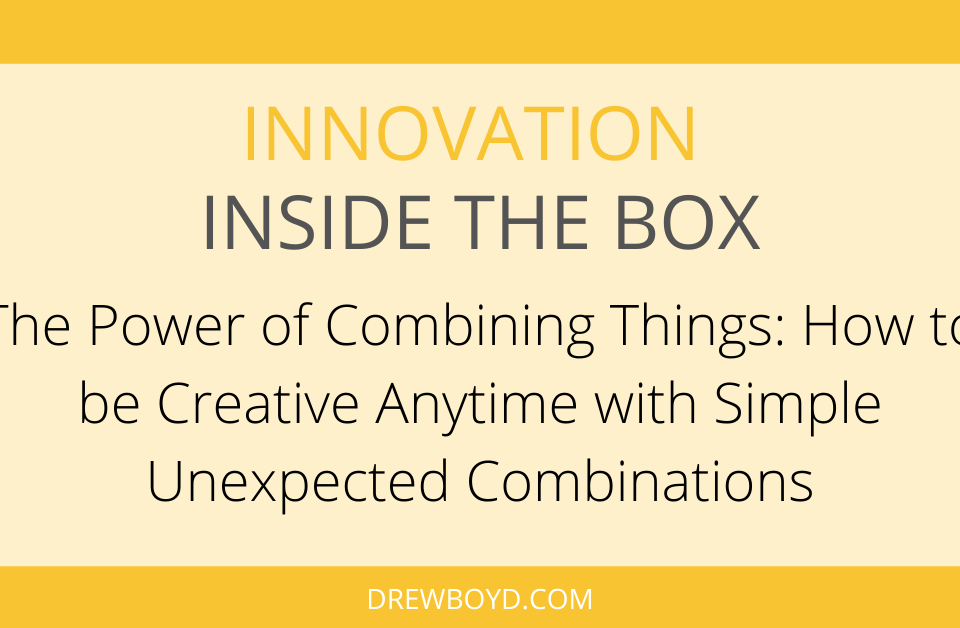 The Power of Combining Things: How to be Creative Anytime with Simple Unexpected Combinations 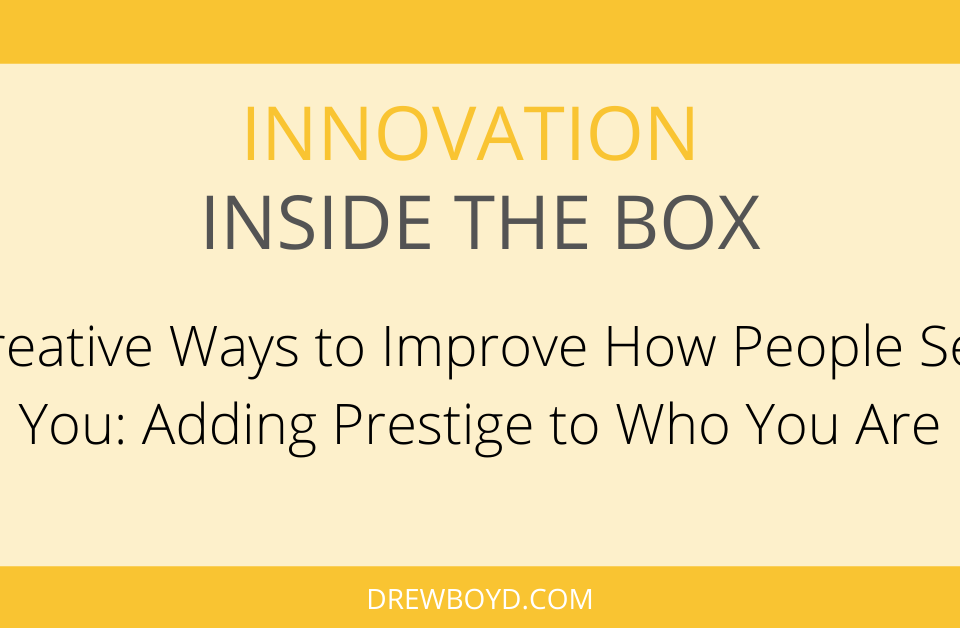 Creative Ways to Improve How People See You: Adding Prestige to Who You Are