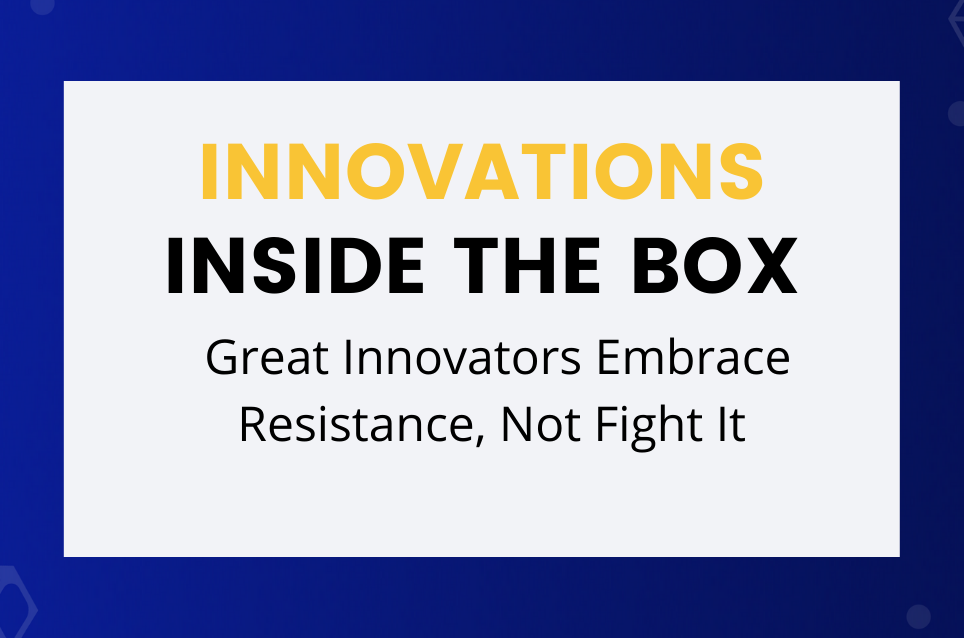 Imagine your marketing team comes up with an idea for a great new product. You absolutely love it. But when you start shopping the idea around the building, you get some very strange looks from people. People are resisting the idea, and you and your team are getting frustrated. Resistance to innovation is a natural phenomena in companies, and it can become a huge challenge unless you manage it correctly.

Why do people resist new ideas? As you’ll see in a minute, there are lots of reasons. But before I dive into them, let’s first understand that resistance is necessary. That’s right. Necessary. Here’s why.

That said, it must be addressed if progress is to happen. You, as the leader, have two important roles to play. First, see yourself as a Resistance Maker. When new ideas are brought to you, it’s okay to question it, bring up challenges, and so on. But you also have to serve as a Resistance Breaker, someone who works within the company to knock down the barriers and cause adoption of the new idea. Let’s understand the sources of innovation.

By characteristics of the innovation, I mean the factors of the idea itself that make people resist it. For example, what value does it bring, how risky is the idea, how compatible it is with your current products and services? Can the idea be tested, preferably in stages, and can we back out it if needed? How complex is the idea, and can it be communicated clearly? Sometimes people resist ideas because they just don’t get it. Finally, is there flexibility to change the idea, how long will it take to realize the benefits, and will the idea have some unintended side effects on other projects? In the exercise files for this course, you’ll find a handy checklist and definitions for all of these factors.

Resistance can also arise because of certain personality traits of the resistor/adopter. I call them that because we all start as resistors to a new idea, even if just a tiny bit before adopting it.

These traits include how much they perceive the benefits and risks, how motivated they are to change, and their attitude and experience with previous innovations. If they had a bad experience with the last idea, they’re going to be more resistant to the next one. Another trait that can affect how reistive they are is their own ability to generate highly creative ideas. The poorer they are at innovating, the less likely they’ll be open to new ideas.

Resistance can also arise depending on who you are as the person selling the idea. If you’re seen as credible and as someone who explains ideas clearly and informatively, you’ll meet with less resistance.

Your job as the Resistance Breaker is to understand the strongest sources of resistance and to find ways to lower the effect. Don’t try to tackle every source, just the ones that matter and that can be changed. If you do, you’ll find that next great idea winning in the marketplace.